The Cougars scored at least a touchdown in every quarter and its defensive stepped up big in the first half en route to a 35-15 victory. 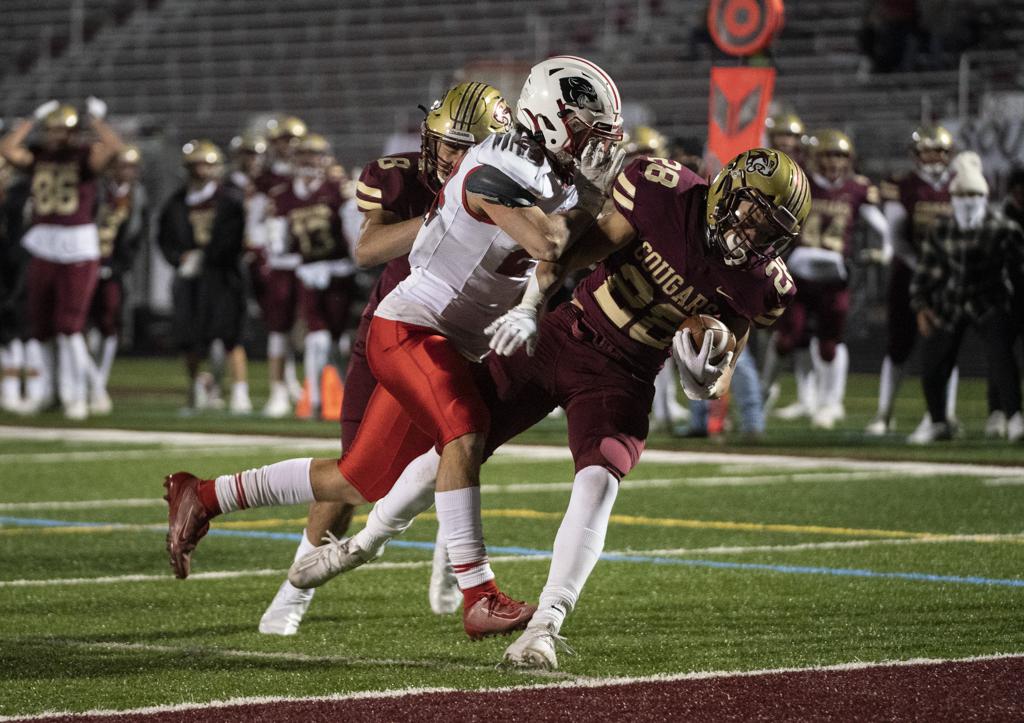 Lakeville South's Carson Hansen (28) leaned in for a touchdown as Lakeville North's Noah Nephew (24) tried to stop him in the first half. Photo: RENEE JONES SCHNEIDER renee.jones@startribune.com

Running the power-T offense to near perfection isn’t Lakeville South football’s only nod to the old school.

Building a program into a consistent winner, coach Ben Burk said, is akin to a flywheel —– a centerpiece in the Industrial Revolution beginning in the 1700s.

“Once you get the flywheel going, it doesn’t stop easily,” Burk said. “We used that metaphor to get this senior class started when they were freshmen.”

A season ago, South ended a 10-game losing streak against Lakeville North. On Friday, a 35-15 victory owed to the top-ranked Cougars’ kinetic energy.

Efficient and often explosive on both sides of the ball, South dismantled the ninth-ranked Panthers. The victory was South’s first at home against North since 2006.

“I’ve been watching North and South games as a coach for 10 years and it’s always gone their way,” Burk said. “So last year was big and this year was about solidifying that.”

The Cougars (4-0), playing at home, scored at least one touchdown in every quarter. Sophomore Carson Hansen, who scored four touchdowns last week, turned a third-and-27 situation into a 75-yard touchdown run in the second quarter.

“Third-and-long for a lot of teams is pass but with them it’s that trap play,” North coach Brian Vossen said. “It’s part of what makes them a good team that is so hard to play against.”

“I was surprised the refs didn’t blow the whistle because they had him wrapped up,” Burk said. “Then, there he went. I kept looking at the ground, thinking he would step out of bounds.”

Defensively, South drove the Panthers (1-2) backward on consecutive drives to close out the first half and preserve a 14-7 halftime lead.

“Everyone at all three levels — the line, the linebackers and the defensive backs — were all on the same page,” said senior Reid Patterson, who started at quarterback and played linebacker.

Two returning players keyed the effort. The game was the first with senior Riley Mahlman, an athletic, 6-8, 290-pound two-way lineman, since he was injured in the season opener. The Wisconsin-bound Mahlman, perhaps the state’s top college prospect, made plays on defense and helped the offense control the line of scrimmage.

Lakeville North finally played its originally scheduled opponent. COVID-19 concerns forced two last-minute changes and a postponement against Eastview, a game which will be played Monday.

Efficient and often explosive on both sides of the ball, Lakeville South justified its top-ranked Class 6A status with a 35-15 dismantling of No. 9 Lakeville North.

The host Cougars (4-0) scored at least one touchdown in every quarter Friday. The second was a 75-yard rush by sophomore Carson Hansen. The fifth came on a 64-yard escape from senior Garrett Savard.

Defensively, South drove the Panthers backward on consecutive drives to close out the first half and preserve a 14-7 halftime lead.

The game Friday marked the return of Lakeville South senior Riley Mahlman. The Wisconsin-bound offensive lineman, and arguably the state’s top college prospect, had not played since getting injured in the season opener.

The rivalry game also became the first time this season that Lakeville North (1-2) played its originally scheduled opponent. COVID-19 concerns forced either last-minute changes or a postponement in the first three weeks. The latter, a game against Eastview, has been rescheduled to Monday.

Check back later for more on the game Friday.